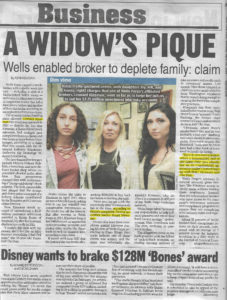 A widow in New Jersey is going after a broker with Wells Fargo Advisors Financial Network, the firm’s independent brokerage, claiming he mishandled her late husband’s life insurance policy payout in speculative trading that cost her hundreds of thousands of dollars in losses, according to news reports.

Robin Fratto, of Freehold, N.J., says that she received more than $2 million from the policy when her husband suddenly died in 2011, WealthManagement.com writes, citing an arbitration claim filed with Finra by Fratto’s attorneys. Fratto, who didn’t have any experience investing, met Leonard Kinsman, who was then with Merrill Lynch, according to the claim cited by the web publication. Fratto allegedly told Kinsman that she wanted to purchase the house that was still in her late husband’s name and get $3,000 a month for her and her three children, Stuart Meissner, the New York-based lawyer representing her, tells WealthManagement.com. But instead of “investing her funds in a moderate diversified long term growth portfolio of stocks and bonds,” Kinsman placed the money on margin and traded in speculative options and non-income producing securities, according to the claim cited by the web publication.

Kinsman moved to Wells Fargo FiNet in 2014 and brought Fratto’s account with him, WealthManagement.com writes. When Fratto wanted to take out some of the funds in June 2017 to pay for the home, she learned that all the funds were gone aside from two annuities, according to the claim cited by the web publication.

Furthermore, Fratto claims that Wells Fargo ignored misleading statements, including her forged initials, on account opening documents, according to the web publication.

The direct link to this article can be found here.